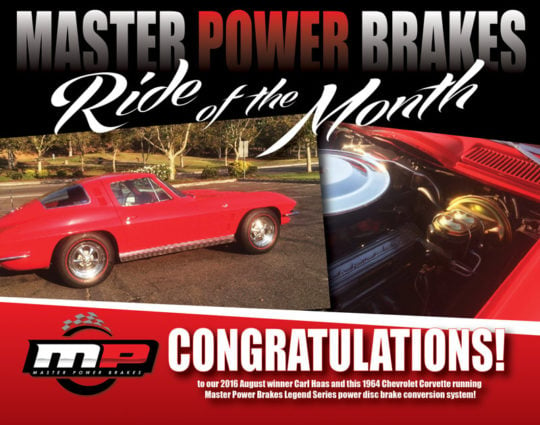 What a choice snag - Carl Haas bought his Corvette four years after it first came out. The August 2016 Ride of The Month Winner is a beauty Carl has owned since 1968. He tells us the back-story of how he came to acquire it:

"This was my dream car in high school, but couldn't afford. After graduating and getting a job, I responded to an ad for this car. The car had been wrecked and the owner had no insurance.

In 1990 I did a ground up restoration. After retiring in 2004 I started driving the car and enjoying it."

Overall, Carl kept the original look as much as possible, with the exception of the period correct Crager S/S wheels.

This year, Carl decided to upgrade his ride to get some modern comfort and safety. He told us that he just had a Master Power Brakes disc brake conversion installed. In addition to the power disc brakes, other upgrades included adding power steering, a 5 speed overdrive Tremec transmission, and vintage air conditioning. He had just finished the upgrades the week before he sent in this winning entry!

Carl's 1964 Corvette originally was somewhat rare because it had a white leather interior. Other than that, it was the basic 300HP 327, 4 speed car with no air, power steering, or brakes. With the new upgrades, Carl says the Vette is truly a pleasure to drive. Now that Carl has owned the car for almost 50 years, he is looking forward to a time a bit down the road when he can pass it on to his grandson.

Stand Out From The Crowd -  With Ride of The Month!

Hey there, classic car buff, builder/cruiser – YOU might be our next Ride of The Month honoree! Click here to share your pictures and stories with Master Power Brakes. You may see your own vehicle and classic restoration story here on the MPB Tech Talk blog in the coming months.