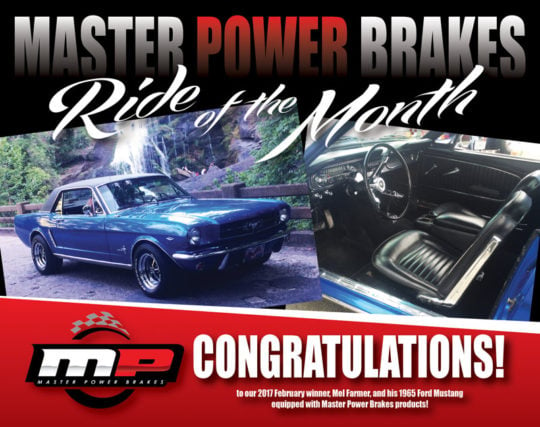 Our February 2017 Ride of The Month Winner is a 1965 Ford Mustang submitted by Mel Farmer! Here's Mel's quick highlights of his ride:

With Mel's 1965 Mustang being this month's Ride of the Month, we thought it would be a good opportunity to discuss a bit of history around the 1965 Ford Mustang!

In the Spring of 1964 Ford introduced the new 1964-1/2 Ford Mustang. Technically an early 1965 Mustang and based on the Falcon platform, a hardtop coupe and convertible were initially offered, with the 2+2 fastback coming out in time for the official opening of the 1965 model year. But by introducing it in spring as a 1964-1/2 model, Ford avoided the noise of the new model year of all the other auto manufacturers and made introduction of the Mustang stand out.

Part of the appeal of the Mustang draw was the ability to have it built to your specifications. The consumer had a say and were willing to pay or not pay for it. The Mustang could be equipped to be anything from a basic economy car to a high-powered sports machine. Engines ranged from the modest 170 ci with 100 horsepower in-line six to a solid-lifter high-performance 289 ci with 271 horsepower V8. Along with a long list of options, for the first time, you could custom design your car to suit your desires.